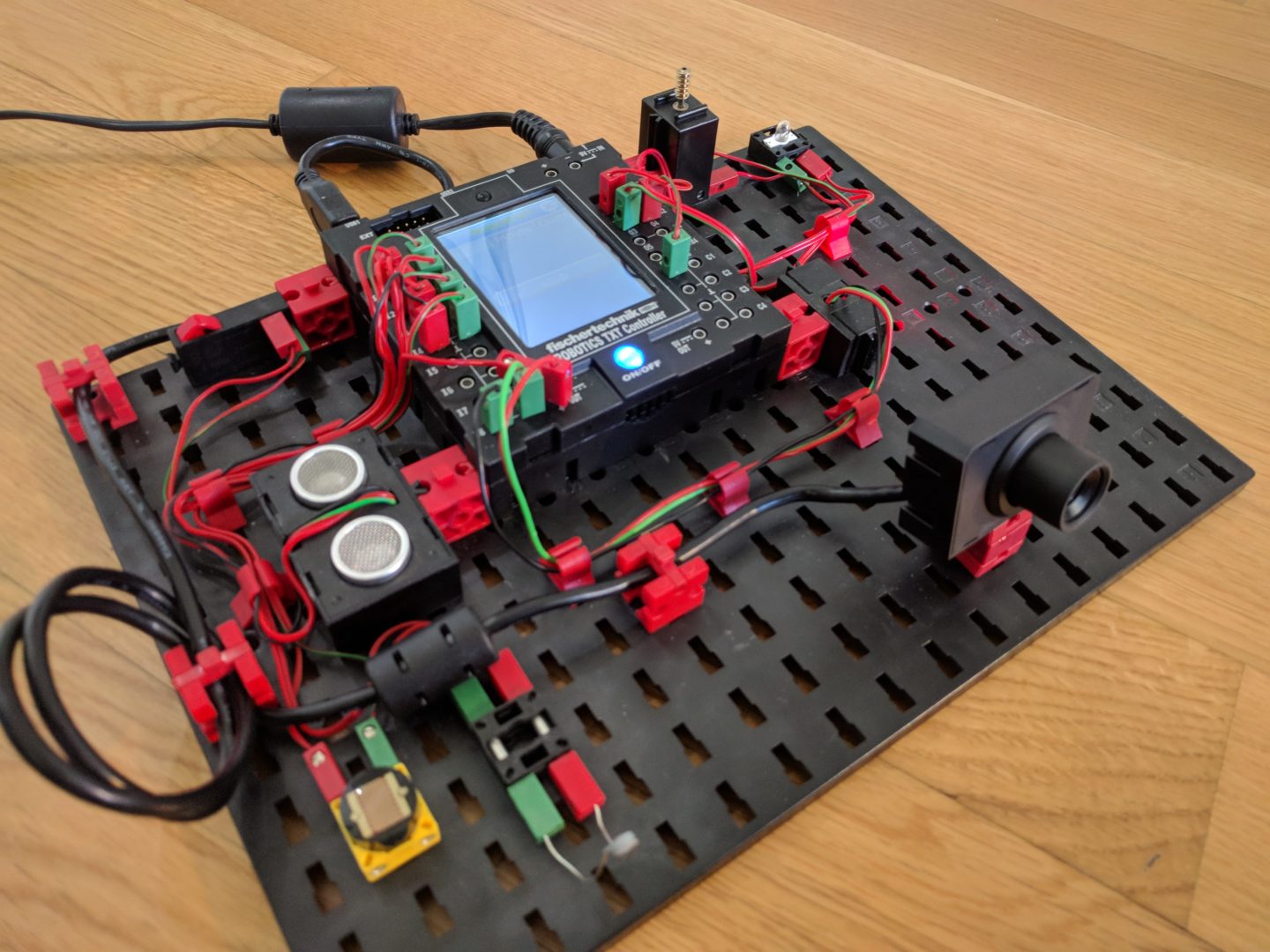 fischertechnik launched the smart home kit last year. A very good move on a conceptual level. Smart home and IoT (internet of things) are rapidly growing technology sectors. The unique placement of the TXT allows it to be a perfect introductory platform to this world.

However, the smart home platform from fischertechnik relies on a central cloud server. This leads to vendor lock-in and challenges to integrate it with other products. Making the cloud your primary interface also means you’re vulnerable to internet outages. Of course the risk really depends on the device type, but you wouldn’t want your thermostat to stop working, just because your internet was down.

fischertechnik is a toy company, though their toy is intended to also serve as a prototyping platform for automation solutions and as education tool. As part of that they, similar to the much better known solution from Lego, have an interface that can run programs to control actors and read out sensors. The latest iteration of this interface is called the fischertechnik TXT. It has an ARM Cortex A8 and can easily be used with custom firmware. This makes it a great platform to build sustainable IoT applications.

Beyond that, the TXT Controller can be connected to a cloud server, in which the sensors’ data is saved, and can be retrieved from anywhere in the world. So using a user interface, a so-called “dashboard”, the various sensor data can be permanently monitored, and the movement of the camera can be controlled.

Mozilla started venturing into IoT recently. They are trying to advocate for better privacy and user freedom by promoting interoperability. These goals are unified in a proposal for a device API that is based on web protocols called “Web of Things”. It is developed in collaboration with smart home and “industry 4.0” manufacturers. This API isn’t necessarily implemented by each device directly, some devices are too low powered to provide a web server or are using other successful local mesh networks like Z-Wave or Zigbee. In these cases a gateway that is connected to the user’s local network would provide the web thing API.

The web thing API breaks physical devices down into three attributes: properties, actions and events. Properties as stateful values that can both be changed by the device and the user (I’ll often refer to the user as the client). A device can however declare a property as read-only or add input value restrictions. Actions let the user execute an action on the device that either isn’t stateful or affects multiple properties. Lastly, events are fired by the device to indicate a momentary effect that is not reflected in the state. Above that is a capabilities system, with which devices can indicate the semantics of their features. For example a light bulb can advertise itself as being a “Lamp”, it’s brightness property will be a “BrightnessProperty” and the power toggle will be an “OnOffProperty”. These allow clients to expose appropriate UIs and behaviors for devices. The protocol is available over HTTP(S) and optionally WebSockets for real-time communication of changes.

Mozilla is developing both a reference gateway to control devices using this protocol and reference implementations in multiple languages to build web things with. The “WebThing gateway” also has an adapter system to bridge other smart home protocols to the web of things data model.

A TXT is easily powerful enough to run the web server required for the web thing API on its own and be a proper web thing. I’ve taken the python APIs from the community firmware and Mozilla’s python web thing library to create an app that can turn the TXT into a web thing. It currently exposes all inputs (I1-I8), outputs (M1-M4/O1-O8), telemetry of the TXT, the camera as well as the counter inputs (C1-C4) as properties. Only the actor properties are writable. Further it provides actions to play a built-in sound and reset a counter input.

The fischertechnik solution for smart home functionality uses MQTT. Why not just adapt that to the web of things? MQTT is only a protocol and the actual packets aren’t standardized. Sadly fischertechnik’s solution is designed to communicate with a cloud solution from a third party. Thus, you’d would have to figure out how to make the TXT connect with a custom MQTT consumer. All in all, I decided it was much simpler and resilient to write an implementation of the web thing protocol that runs on the TXT.

The “WebOfTXT” app, the application connecting the TXT to the web of things I wrote, offers configuration for the sensor and actor types connected to the TXT. After the configuration is set, the user has to start the web thing server. Before starting the server, the schema for the thing is built based on the selections from the user. A QTimer is started to get updated property values. As an exception, the actor properties are only changed by clients of the web thing API, setting the speeds or levels for the outputs. The two actions trigger the respective functions in the TXT API based on the provided inputs. All inputs from API clients are verified by the web thing python package to be valid inputs. For example the actor levels are checked to be integers in the allowed range for the actor type. These limits are also published as a schema in the web thing API, so clients can also expose these limits to the user.

A special case is the camera. It is exposed as an image snapshot. However the image is not served via the web thing API. HTTP can already handle images just fine and there’s no need for scaffolding information. Further an image can’t be written, only read. Thus the image property just points to an image file hosted by the TXT. The TXT updates this image about ten times a second. However refreshing it is entirely up to the client and no notification is sent when a new image is available. For all other properties, the web thing sends an event whenever a property value is changed, so the client can immediately display the updated value.

I found out, that starting the web thing server in the main app thread blocks the TXT UI. Thus the web thing server is started in a separate python thread with its own event loop. Otherwise, the application could not be stopped from the TXT, since it would no longer be registering touch screen inputs.

fischertechnik’s smart home solution is focused on getting the user up and running with little effort and little first party infrastructure. It is relatively simple to build solutions for the TXT that can be used in conjunction with other smart home or IoT devices, though. I believe building your own solution is even more valuable for education on the topic, for example because you can easily consume the data yourself afterward. Bringing up privacy, security and interoperability in IoT education is important, especially considering major manufacturers are avoiding the topics.

Source code of my python bridge can be found in the freaktechnik/WebOfTXT GitHub repository. The python script is only about 750 lines of code, however it requires a couple of python packages to do the heavy lifting. Those are installed by the build.sh script, which produces a ZIP file that can be uploaded to the TXT via the web UI of the community firmware. This should be a good starting point to create a more specific web thing with the TXT and annotate it with the proper capabilities. I want to thank all Mozilla employees and friends from the fischertechnik community that have helped me during the creating of this app, as it was my first time seriously writing python.

A slightly shortened, fischertechnik-specific variant of this article was published in the ft:pedia 1/2019 (pages 64-67)